I just read a book that I really, really enjoyed.  It’s called The Very Worst Missionary by Jamie Wright, and it’s a memoir about how her five years as a missionary in Costa Rica made her realize that missionaries, a lot of times, don’t do very much good in the communities that they try to serve.  (It’s about a lot of other things, too.  You can get the book or read Jamie’s blog if you want.  Also this post is not sponsored; I just really like Jamie and her work.)

Here’s the thing that bothers me, though.  See, Jamie swears a lot.  That’s who she is and how she talks, and she never directs cuss words towards people.  She just swears in conversation, and she has a lot of great things to say about Christians and missions and the church.  But when I was browsing through reviews for her book, I saw a lot of people who dismissed the book and her opinion because of the swearing alone.

This isn’t new, and it especially isn’t new in the Christian community.  But I think it’s a huge problem.  If you dismiss someone’s opinion because you think their reasoning is all wrong, go for it!  If you ignore a suggestion because you truly think it’s a bad idea, that’s fine!  What’s not fine is to completely dismiss someone’s opinion simply because they use a few words you don’t like.

I just want to be clear — by profanity, I don’t mean racial slurs, homophobic slurs, or slurs of any kind.  I am not okay with people perpetuating harmful stereotypes or hate towards individuals or groups of people.  Insulting people is not cool.  But profanity as a linguistic tool is perfectly fine.

Because here’s the thing about profanity.  It’s meant to elicit and portray strong emotions.  We use profanity when we’re in pain, or heartbroken, or furious.  But some people also use it in regular conversation because that’s just how they talk.  If you hear it a lot, you are more likely to use it, and it just becomes another way to express yourself on the daily.  It becomes part of your personality.  And using profanity casually does not negate your opinion.

Let me say it again: using profanity casually does not negate a person’s opinion.

I understand that some people really won’t read Jamie’s book because they are uncomfortable with the language.  And (I will grudgingly note) it is nice that some reviewers pointed out the swearing for those who really, really don’t want to read those words.

If you’re going to dismiss someone’s opinion completely, make sure it’s for a better reason than “they say fuck too much.” 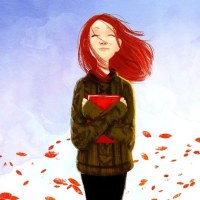 accionails.wordpress.com/
Mildly Interesting
Girl on Books
Girl in the Pages

Investigating YA for Intelligent Readers

...where the ladies are headstrong and the man is outnumbered.

Author and editor of YA fiction

The life and times of a pop-culture junkie and music addict living in Arlington, Virginia