Book Review: The Far Away Brothers by Lauren Markham 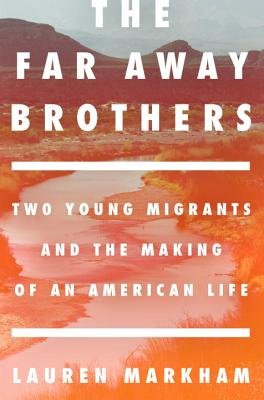 Growing up in rural El Salvador in the wake of the civil war, Ernesto Flores had always had a fascination with the United States, the faraway land of skyscrapers and Nikes, while his identical twin, Raul, never felt that northbound tug. But when Ernesto ends up on the wrong side of the region’s brutal gangs he is forced to flee the country, and Raul, because he looks just like his brother, follows close behind — away from one danger and toward the great American unknown.

In this urgent chronicle of contemporary immigration, journalist Lauren Markham follows the seventeen-year-old Flores twins as they make their harrowing journey across the Rio Grande and the Texas desert, into the hands of immigration authorities, and from there to their estranged older brother’s custody in Oakland, CA. Soon these unaccompanied minors are navigating a new school in a new language, working to pay down their mounting coyote debt, and facing their day in immigration court, while also encountering the triumphs and pitfalls of life as American teenagers — girls, grades, Facebook — with only each other for support. With intimate access and breathtaking range, Markham offers a coming of age tale that is also a nuanced portrait of Central America’s child exodus, an investigation of U.S. immigration policy, and an unforgettable testament to the migrant experience.

If you want the most realistic look possible at the life of an immigrant without actually knowing one, this is the book you need to read.  It’s so thoroughly researched and well-written, it reads like a novel. But all of it is true, and all of it is fascinating.

Markham follows Ernesto and Raul Flores from childhood to the present.  Through in-depth interviews with them and their family members, she learns their story and tells it exactly as it happened.  In between chapters, she inserts shorter, more newsy vignettes about the plight of Central American immigrants in general, with statistical evidence from previous reporting.  And every chapter is thoroughly cited in the last few pages of the book.

Ernesto and Raul deal with more stress before the age of 18 than anyone should have to in a lifetime.  And they’re typical teenage boys — they make surprisingly mature decisions and some face-palm-worthy dumb ones.  (They remind me a lot of my brother in that way.)  They want to better themselves, and take steps towards achieving that, but fear and stress and trauma often get in the way.  They have to survive on their own much earlier than most Americans do, and struggle to trust anyone given their experience with gangs back home.  They both have ups and downs and both fight their own minds at times.  Their own relationship changes the older they get, and they have that to deal with, as well.

The sad thing about reading this book is that we don’t get to find out what happens to them in the end — the book was published early this year, and obviously, Ernesto and Raul are still living their lives.  They both get their papers within the duration of the story, but we don’t find out whether they finish high school, whether they get to visit their parents, or whether their sister makes it to the US also.  I imagine the twins themselves are waiting to find these things out, too.

More than anything, this book highlights the fact that we are just trying to live the best life possible given our circumstances.  It implicitly emphasizes that no one is really good or bad — we all have altruistic sides, and we all make mistakes.  The fact that immigrants are human and could possibly make dumb decisions should not deter us from doing everything in our power to make legal entry to the US easier.  Reading this book is an eye-opener to the threats of violence that many Central Americans live under every day, and if doesn’t make you more sympathetic to immigrants, I don’t know what will.

Final verdict: Markham is a skilled author and reporter, and this book is well worth the read.

This book was provided to me for free from Blogging for Books in exchange for this honest review.