I have about 12 weeks until I graduate.  Which means I have about 12 weeks to finish 3 big projects and pass 2 other classes before I can walk across the stage in my cap and gown.  It seems like a ton of time and also like not much at all, especially when I think about the fact that for my Spanish capstone, I’m planning on reading 7 books (at least) and have so far finished 1.  But honestly, I’m not too stressed.  I’m making progress, and I’m on the right track, and I’m excited to begin really diving into this project.

The overall theme for my capstone is the immigration of Spanish-speakers into the US.  I don’t have a definite thesis yet, because I’ve only read one of my sources.  Also, this what-I’m-reading post will be a little different from the others because I haven’t read most of these books yet.  But I figured it would be a fun idea to briefly introduce my books here, and then once I’ve finished my project, I’ll do a reprise post on what I thought about them and how useful they were to me for my project. 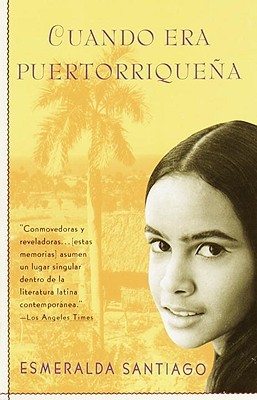 This book is the one I’ve finished, and it’s a memoir about growing up in Puerto Rico and then having to move to New York.  Santiago is the child of parents who fight more often than not, and who must provide for eight children.  Family stress and the stress of growing up are magnified by having to move to New York just when she feels she’s beginning to get a hold on life in Puerto Rico.  But interspersed in these struggles are the stories of a mother who would do anything for her children, and a girl who got herself out of Brooklyn all on her own.

This is the sequel to Cuando era puertorriquena, and it details Santiago’s life from her teenage years to adulthood.  During her struggle to figure out who she is — Puerto Rican? American? both? — Santiago helps translate her mother through the welfare offices and takes on prestigious roles at her performing arts high school.

Ramos, an executive at Univision, has written essays and collected interviews from immigrants to the US.  Told in an editorial, persuasive style, Ramos sheds light on the reality of those “living in the shadows” and reveals just how vital they are to US society.

Alma Flor Ada is a renowned Cuban-American author and professor who writes children’s books, poetry, and novels.  Vivir en dos idiomas is her memoir, detailing her life, which has been spent mostly not in Cuba.

lmost everyone has heard of The House on Mango Street.  It is one of the most famous coming-of-age novels there is.  I’ve skimmed the book a few times, and honestly, have not loved it.  But I feel I might appreciate it more within the context of this project.  It’s not quite a memoir, like the others, but Cisneros did draw heavily on her growing-up years to craft this novel, so it’s still a good candidate for my project.

Another memoir about growing up Latina in America, this book adds a new dimension in that Hernandez is also bisexual.  It details her growing up years and her struggle not only to find the balance between two cultures, but also to maintain family ties while not hiding all of who she is.

hen she was little, and living in Mexico, Grande’s father left for the US without her, her siblings, or her mother.  Her memoir tells the story of virtually losing one parent, and then regaining him, and a new home, when her father finally sends for her.

Once I have read these books and have a better idea of what they are about, I’ll link back to this post and review them again.  I’ll be honest; judging by the one I have read and the others I’ve flipped through, I have high expectations for all of them.

This is Ramos’ own memoir about moving from Mexico to the US.  I know I like his writing style, and admire him as a person.  But there are several reasons I probably won’t use it.  For one, I already have seven books to read, and for two, this book is quite a bit longer than most of my others.  Finally, I realized that all the rest of my books are by women (besides the other one by Ramos, but in that he interviews men and women), and given the difference in countries of origin I already have, I’d rather keep my mostly-female-author pattern going.

When I initially picked this, I thought it was going to be more like academic nonfiction.  Instead, it’s the story of 19 immigrants who died on their way to the US in 2003.  I’m sure it’s a tragic story, and definitely one that should be spread.  Unfortunately, it doesn’t fit with the other books I’ve chosen.  But that’s not going to stop me from reading it when I finish my project.

This is another coming-of-age novel, and honestly, I don’t know much about it.  I didn’t look into it as much as the others, because I changed my focus from novels to memoirs.  But I like coming-of-age stories, so this will be going on the TBR as well.