My family are holiday travelers.  Thanksgiving and Christmas have always meant packing suitcases and spending 3 or 4 or 6 hours in the car.  Out of the 16ish years my brain allows me to recall, I can remember one Thanksgiving spent at my own house — all other holidays are spent at grandparents’, or whichever relative has the biggest house at the time.

A lot of families I know have several generations all living within a few miles of each other.  When I realized as a first- or second-grader that some of my classmates saw their grandparents every Sunday for dinner, I was amazed.  I thought everyone had to travel for hours to see their family members.  Trips were especially long when I was little — my mom’s side of the family lived 6 hours away,and my dad’s side was a whopping  12.  I don’t know how my parents stood it.  If it had been me with a 5-year-old, a 4-year-old, and a baby, I would have been letting my parents come to me.  (Actually, my dad’s parents did come to us eventually — they moved a much closer 3 hours away when I was in middle school.)

Because of the long drives, we hardly ever stay with relatives for less than 3 days.  And when I say stay with relatives, I mean with relatives.  Some families prefer to maintain some breathing room by renting hotels if they  visit family, but not us.  Neither side of my family is afraid to break out the air mattresses — having up to 18 people in a 3-bedroom, 2-bath is not uncommon.

It sounds chaotic, and it is — but not in an unbearable way.  By some stroke of luck, both sides of my family get along with each other pretty well.  There are feuds here and there, and the occasional silent treatment between siblings, but fights get put on the back burner during the holidays.

Holidays with my mom’s side are full of home-cooked Southern food and visiting old friends.  I appreciate this now, but as a kid it sometimes got a bit monotonous.  My mom has three sisters, but only one of them had a kid, and she was born 15 years before me.  Having essentially only each other to play with during holiday visits, my siblings and I often bickered (not that it was any different at home).  But we would bring lots of books and toys to keep us occupied, and visits to the local zoo were always looked forward to.  Also, my grandmother’s home was close to the state capitol building, which had an amazing archive.  This archive included a collection of beautiful donated clothes, complete with a 50s(?)-era wedding gown, that young children like me were allowed to dress up in.  While I don’t remember ever going there during the holidays (it was more of a summer thing), archive visits with my mom and grandmother will always be treasured memories.

My dad’s side of the family makes up for the cousin “deficit” of my mom’s side.  On his side, there are 8 of us, almost perfectly stair-stepped in age.  Amazingly, we all get along great.  Once I aged into middle school, we had all hit that sweet spot where we could collaborate.  For about 4 or 5 years straight, my cousins and I would spent the day or two right before Christmas or Thanksgiving locked in a bedroom, writing a play.  We’d come up with the premise, and each create our own character, then we’d write a script.  Inevitably, the younger cousins would float away during that part, but we’d reign them back in to create costumes and practice.  We’d even write advertisements, which we’d tape to walls and doors throughout the house, to draw in our audience (who would’ve attended no matter what).  Then, typically the evening before everyone left, we’d perform our play for our grandparents, parents, and aunts and uncles.

As we all got older, interest in the plays waned.  The cousins who were in elementary school during our prime play season continued to suggest them into their middle school years, but as a whole, we had grown out of them.  We moved on to books, manuscripts, video games, and preparation for the zombie apocalypse.  I, as the oldest cousin, started playing up-and-down with the grown-ups at night rather than cramming on the couch to watch a movie.  We began discussing current events instead of hypotheticals.  We started graduating high school.

When that side of the family gets together now, we are a little more separated.  Those closest in age end up basically glued together while the rest of us bounce around doing our own thing.  When we get older, though, we’ll still make an effort to all get together with our own families — we’ve already talked about it.  Those cousins are a tight-knit group, and our Christmas plays definitely played a role.

This year is a dad’s side Christmas (we visited my mom’s side for Thanksgiving).  Typically we switch sides every year, but I have a feeling next year will be more complicated, since my boyfriend and I are planning on being engaged by then.  I guess we’ll all have to do some adapting.  But this year it’s still relatively simple, and even though my hermit side occasionally dreads being around so many people for so long (though I do love them all dearly), I think I’ll have an easier time appreciating it all.  In the finale of The Office, Andy says this: 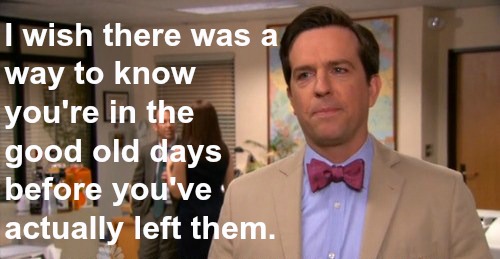 Lucky for me, I do know that these are some of the good old days.