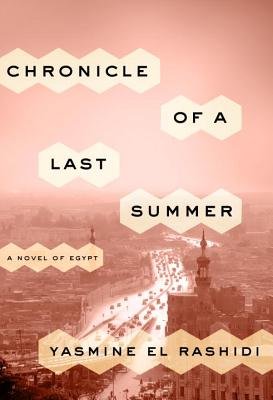 Cairo, 1984.  A blisteringly hot summer.  A young girl in a sprawling family house.  She passes her days quietly: listening to her mother’s phone conversations, looking a the Nile from a bedroom window, watching the three state-sanctioned TV stations with the volume off, daydreaming about other lives.  Underlying this claustrophobic routine is mystery and loss.  Relatives mutter darkly about the newly appointed President Mubarak.  Everyone talks with melancholy about the past.  People disappear overnight.  And her own father has left, too — why, or to where, no one will say.

The story unfolds over three pivotal summers, form her youth to adulthood: as a six-year-old absorbing the world around her, filled with questions she can’t ask; as a college student and aspiring filmmaker preoccupied with love, language, and the repression that surrounds her; and later, in the turbulent aftermath of Mubarak’s overthrow, as a writer considering the silences that have shaped her life.

At once a mapping of a city in transformation and a story about the shifting realities and fates of a single Egyptian family, Yasmine El Rashidi’s Chronicle of a Last Summer traces the fine line between survival and complicity, exploring the conscience of a generation raised in silence.

The next time I choose a book about a country other than my own, I am going to make sure that I know a little bit of background before I dive in.  To be honest, I had very little idea what was going on throughout the entire book.  Several significant political and personal events happened (I think), but I couldn’t really figure out what because there was very little description and very little dialogue.

I think this was intentional, though, because the main (and nameless) character didn’t really know what was going on either.  For the vast majority of her growing-up years, our MC was virtually stuck inside her own mind, and that is definitely how this book feels.  No one would really talk to her —  there are verbal exchanges, but most of them are non-versations where true feelings, facts, and questions go unsaid and unasked.  Also, I don’t think there was one set of quotes in the entire novel — what dialogue there is is written in the context of the MC thinking about them after they have happened.  Everything is filtered through her thoughts, almost (but not quite) like a stream of consciousness.  It’s more like a stream of observation, which is probably what her entire life has felt like, since silence is such a dominating theme in the book.

Honestly, it’s a bit frustrating to read the book, because things keep happening, but we don’t really know what they are or why they’re happening.  The reading experience definitely mirrors the MC’s entire life, however, and that really speaks to El Rashidi’s talent.  She makes the reader identify with the MC without even realizing it.  I didn’t realize the extent of this until I began writing this review, and that almost made me add a star to my rating.  However, even if I knew more about Egypt’s history and better understood the events surrounding the MC’s life, I still think I would have found this book a bit bogged down.  I understand that this was probably intentional, and is important to the understanding of that time in history, but I have read other books similar to this that were more engaging.  Thus, I stuck with three stars.

I would recommend this more to people with a niche interest in history and/or Egypt than to a general reader.  However, I would also be interested in learning a bit more about El Rashidi’s other work, because she seems to be influential and well thought-out.

This book was provided to me for free by Waterbrook Multnomah in exchange for this honest review.  All opinions expressed are my own.