Book Review: Buying a Bride by Marcia A. Zug 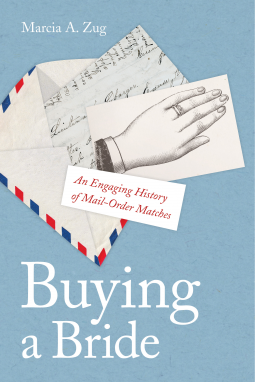 There have always been mail-order brides in America—but we haven’t always thought about them in the same ways. In Buying a Bride, Marcia A. Zug starts with the so-called “Tobacco Wives” of the Jamestown colony and moves all the way forward to today’s modern same-sex mail-order grooms to explore the advantages and disadvantages of mail-order marriage. It’s a history of deception, physical abuse, and failed unions. It’s also the story of how mail-order marriage can offer women surprising and empowering opportunities.

Marcia A. Zug is Associate Professor of Law at the University of South Carolina.

Firstly, it took me so long to finish this book.  But it wasn’t because it was boring, wordy, or stuffy.  Quite on the contrary, I was sucked into this book every time I picked up my Kindle.  The tone is simultaneously academic and anecdotal.  Reading it was like listening to a really engaging lecture.  Honestly, I could see it being assigned for some type of women’s studies course.

This book opened my eyes to the realities of mail-order marriage.  Like most Americans, I have always thought of mail-order brides as somewhat desperate.  I would never have stopped to consider the possibility that mail-order marriage is not only highly beneficial for the bride herself, but also for the society and economy into which she assimilates.

While Zug acknowledges that there were and are cases where the woman enters into an abusive or otherwise unsatisfactory union, the majority of mail-order brides and their husbands find a lot of satisfaction, maybe even more than those who found each other traditionally.  Because mail-order brides were solicited and entered into with lots of consideration, the women were valued very highly by the men.  The matches wouldn’t work unless both parties knew the other’s expectations and lived up to them.  This way, women were and are able to choose the most advantageous situation rather than having to settle for an unequal match or a life of single-hood.

Along with this relational satisfaction, mail-order brides were good for the economy.  In the early days of the US, the presence of women allowed more permanent settlements, so the government offered incentives for women who moved west for marriage.  This was a win-win-win for women, men, and the government.  In modern times, Zug makes the point that married couples contribute more to society, and mail-order marriage has allowed men who have otherwise dismal prospects to enjoy marriage.  Marriage makes happier, healthier people, and those people are more productive, so this ultimately benefits the economy as well.

The book was incredibly well-researched and very interesting to read.  I would definitely recommend it to anyone interested in relationships, women, and global/international relations.  Because of the strong effect marriage has on society, the book touches on many issues other than just marriage, including gender equality, racism, and economics.  It’s a fascinating and authoritative read.

This book was provided to me for free from NYU Press through NetGalley in exchange for this review.  All opinions expressed are my own.