Book Review: The Theft of Memory by Jonathan Kozol 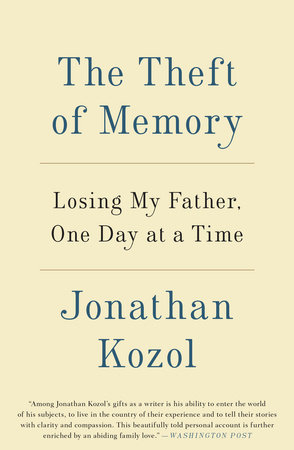 National Book Award Winner Jonathan Kozol tells the story of his father’s life and work as a nationally noted specialist in disorders of the brain and his astonishing ability, at the onset of Alzheimer’s disease, to explain the causes of his sickness and then to narrate, step-by-step, his slow descent into dementia.

Classically trained at Harvard and Johns Hopkins, Dr. Harry Kozol was an usually intuitive clinician with a special gift for diagnosing interwoven elements of neurological and psychiatric illnesses in very complicated and creative people, including Eugene O’Neill.  Later, he evaluated criminal defendants in high-profile cases, notably Patty Hearst and the Boston Strangler.

But The Theft of Memory is not primarily about a doctor’s public life.  The heart of the book lies in the bond between a father and his son and the ways that bond intensified even as Harry’s verbal skills and cogency progressively abandoned him.

Lyrical and stunning, The Theft of Memory is at once a tender tribute to a father from his son and a richly colored portrait of a devoted doctor who lived more than a century.

This book felt less like reading a memoir and more like having having tea and conversation with the author.  The story, which Kozol wrote in the year or two right after his father died, felt natural and loosely woven, but at the same time incredibly profound.  It was obvious from his language and from his discerning tone that Kozol inherited his father’s intelligence and intuition.  He simply recorded his memories of his father as he descended into illness, both the tender moments and the yuckier ones.

His father was a fascinating character.  As the back cover copy notes, Kozol details a few of his father’s specific cases, which he found out more about as he went through his father’s papers during his last years.  As a doctor, Harry Kozol was incredible.  I thoroughly enjoyed reading about his cases, as I have an interest in mental disorders and their causes and treatments.  Part of the reason I chose this book in the first place was the fact that the doctor unfortunately succumbed to one of the very diseases he studied.  His understanding of the mind and doctor’s professional demeanor apparently never really left him, even after all other faculties abandoned ship.

Kozol himself was also intriguing.  He was honest about not wanting to let go of his father, and about the fact that even though he filtered out a lot of the not-so-great memories of his growing up years, there were many parts of his relationship with his father that were actually very strained.  But he seems to take this in stride, understanding that even intelligent, accomplished fathers are not perfect.  He actually sets an incredible example for all his readers with the way he cares for his parents extensively as they age, setting aside any differences they might ever have had.

Overall, this was an incredible story about familial love and the sacrifices we must go through to demonstrate it.