Book Review: A Walk in the Woods by Bill Bryson 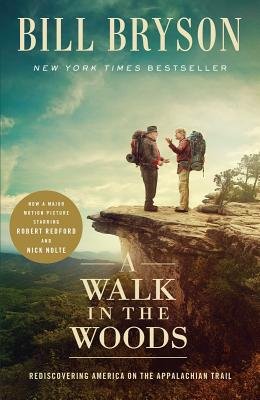 Back in America after twenty years in Britain, Bill Bryson decided to reacquaint himself with his native country by walking the 2,100-mile Appalachian Trail.  The AT offers an astonishing landscape of silent forests and sparkling lakes — and to a writer with the comic genius of Bill Bryson, it also provides endless opportunities to witness the majestic silliness of his fellow human beings.  Bryson’s acute eye is a wise witness to this beautiful but fragile trail, and as he tells its fascinating history, he makes a moving plea for the conservation of America’s last great wilderness.  An adventure, a comedy, and a celebration, A Walk in the Woods has become a modern classic of travel literature.

I like travel. I like comedy.  I like to hike, and I even live near parts of the Appalachian Trail.  What’s not to like about a book that encompasses all three?  While not a book that gripped me from the beginning, I thoroughly enjoyed Bryson’s descriptions of the trail and his interaction with Katz, his companion, and other people he met along the trail.  I laughed out loud at several points, and I even enjoyed his descriptions about the history of the trail, which is not something I would normally be interested in.

My problem with the book came around the middle.  It was the part of the timeline where Bryson and Katz had to take a break from the trail — they had been on it for weeks (maybe months?) and needed to go back home for awhile before finishing.  Bryson describes his attempts to continue the AT by doing short day hikes, and this is where I lost interest.  Perhaps it was because Bryson himself was bored during this part of the trip, and that boredom bled through his writing.  I also think I simply missed the banter between Bryson and Katz, and the gap lasted too long to hold my interest.

In all fairness, I did try to read this book during the middle of a very busy semester in which I was doing a lot of other reading, and I probably would have been able to push through and finish it had the timing been better.  Things being as they were, I stopped at page 196/274, and as it has been almost three months since I have even thought about the book, I’m just going to go ahead and classify it as DNF.  I still give it three stars, however, because of how I enjoyed the parts I did read, and I think I would enjoy the rest if I were to go back and try to finish it.