It was months ago when I wrote about my plans to travel to Costa Rica, and it’s been weeks since I’ve been there and back.  I had planned on writing about my trip each week while I was there, but as it happens, it’s much more fun to go do stuff and write about it later.  So here I sit in my very U.S. living room, thinking back to Manuel Antonio, Costa Rica.

It had been about three years since I’d been on a plane, so the night before I left I was super nervous and couldn’t sleep.  I had to catch my flight pretty early Sunday morning, and my wonderful boyfriend  and parents drove me to the airport.  I’ll be honest; I had been super excited before that point, but exhaustion and excitement caught up to me and in that moment I really didn’t want to go.  But I hugged the people I love and got on the plane, and about seven hours and a few transfers later I was on a 12-person plane over Costa Rica heading for the coast.

When I landed in Quepos, which is a small town right next to the more touristy Manuel Antonio, there was a bit of confusion on where I was supposed to go next, but eventually I ended up with my host parents, Carlos and Janett.  They showed me to my room and let me unpack my stuff, and then they took me on a mini-tour of Quepos and Manuel Antonio, showing me where my school and bus stops were and how to get to the beach.

At this point, I was exhausted, and I understood only about 60% of what was being said, because, of course, everything was now in Spanish.  That night I met about half of Janett’s family when they all got together for a party, and I’m afraid I had exactly zero idea what was going on.

That got better the next day, after I had slept.  I found my way to the bus station with only one wrong turn and made it to the school early.  There, I met the director, David, who thankfully spoke English.  He gave me a brief oral exam to assess my level and put me in a class, and then I met my teacher.

Both my teachers and the classes were amazing.  I went through the Intermedio I textbook during my stay, which covered every verb form imaginable, plus vocabulary and culture studies.  A lot of the grammar I had seen before, which was helpful.  But I learned it much better this time around because I would use the grammar immediately and continuously when chatting with the teachers, my host parents, and locals on the street.

My confidence in speaking grew exponentially.  For one, I was forced to speak Spanish if I wanted to order food or ask questions about the town.  For two, once the person to whom I spoke realized I was a student, they were almost always happy to speak slower and correct my grammar if need be.  And I got much better at using words I do know to explain something I don’t know how to say, rather than just using the English word, as I would in a U.S. classroom.  A lot of the verbs and vocabulary I’ve learned but could never remember are now solidified in my brain, because I had to describe them in Spanish.

The school was only a thirty minute walk to the beach, and it’s impossible for me to be near a beach and not go.  In the four weeks I was in Costa Rica, I think I only skipped the beach two or three days.  It became my routine after class to buy a smoothie or falafel from the falafel bar up the street, then I’d take a walk.  While it was a steep walk, the view was absolutely worth it.

For the first two weeks I was there, I was the only student my age at the school, so I hung out on my own for most of that time.  I will admit, it did get a little lonely.  But it was easy to distract myself from that at the beach.  I love me some good people-watching, and man, it was great in Costa Rica.  There were always people surfing, both professionals and amateurs of all ages and nationalities, no matter how far down the beach I walked.  On the left side, the side of the beach closer to Manuel Antonio National Park, there were a lot of restaurants and shops across the street.  This was where non-locals hung out, and where surf instructors and the parasailing vendors set up their tents.  Farther down, toward the middle, there were chairs set up for rent, where families both local and foreign came to play in the waves.  The right side of the beach butted up against ritzy resorts, and that was where fruit and jewelry vendors walked back and forth selling their wares.  And of course, monkeys and sloths could be spotted anywhere along the beach at any given time.

I did get the chance to take a guided tour of the national park, which was expensive, but worth it because of the pictures.  Admittedly, they’re not the best quality, but that doesn’t take away from the level of awesomeness. 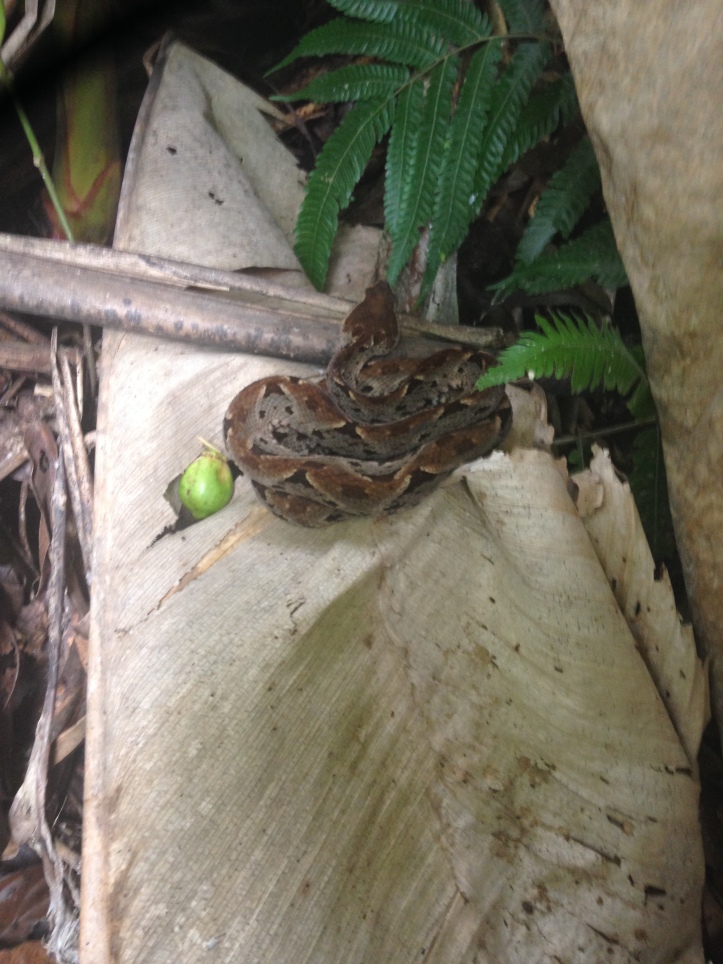 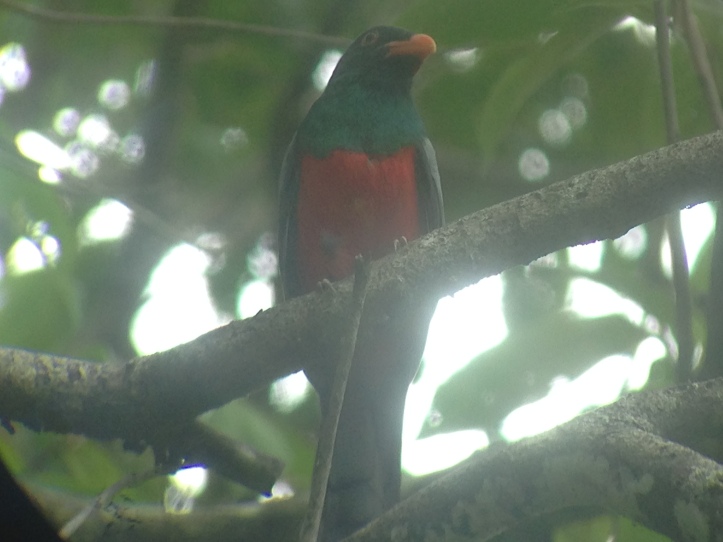 To my delight, another student, F, showed up my third week into the course.  She and I hit it off, and we hung out after class most days, at the beach or walking around in Quepos when it rained.  Sometimes we chatted in Spanish and sometimes in English, and mostly a mix.  We spoke at roughly the same level, which was nice, and we even had class together during my last week.

F likes to dance, so one night we went to a salsa club and danced bachata and merengue and another very complicated Latin dance that I never quite caught the name of.  I had never been to a club before, and I don’t know if Latin clubs in the U.S. are similar, but if they are, I’ll go.  It was a lot of fun to dance, even though I had no idea what I was doing.  I just followed while my partners swung me around — one even dipped me several times, which caught me off guard every single time.  It was a blast.

It was also with F that I discovered what kind of alcohol I like.  I’m underage in the U.S., but not in Costa Rica, so I got to try a few different things.  I’m not ashamed to admit that my favorites are the fruity ones with little paper umbrellas.

By my last week in Costa Rica, I was using Spanish without even thinking about it, at least some of the time.  In the morning, Carlos would ask me a question, and I would respond immediately, my brain pulling the words I needed automatically.  I would only realize I had spoken Spanish after the words left my mouth.  It was absolutely amazing.  I was nowhere near perfect, however — during the last week, I helped out some with a children’s class in the afternoon, and I really had to think to remember some of the vocabulary we were teaching.  Still, it was great review for me, and the speed at which the kids learned was astonishing to see.

At the end of my trip, I left Costa Rica wanting to go back as soon as possible.  I know I want to keep using Spanish in the future — hopefully, eventually, in my job.  It’s not going to go away.  But there really is nothing like being in a completely different, completely amazing culture.  There’s always something new to learn, no matter how long you stay.  I’m already saving up to go back.

Bonus: My Travel Guide to Quepos (or, tips because I’ve been there once and am now obviously an expert)

Disclaimer:  All these tips come from my personal experience and the people I met there.  Always use your own judgment when traveling abroad.