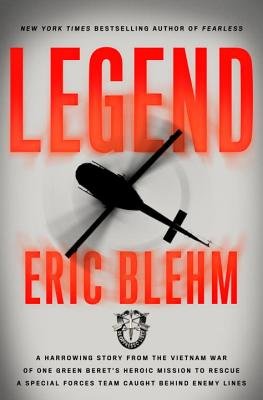 In Legend, acclaimed bestselling author Eric Blehm takes as his canvas the Vietnam War, as seen through a single mission that occurred on May 2, 1968.  A twelve-man Special Forces team had been covertly inserted into a small clearing in the jungle of neutral Cambodia — where U.S. forces were forbidden to operate.  What the team didn’t know was that they had infiltrated a section of jungle that concealed a major enemy base.  Soon they found themselves surrounded by hundreds of North Vietnamese Army soldiers, under attack, low on ammunition, and stacking the bodies of the dead as cover in a desperate attempt to survive.

When Special Forces staff sergeant Roy Benavidez heard the distress call, he jumped aboard the next helicopter bound for the combat zone.

What followed would become legend in the Special Operations community.  Flown into the foray of battle by the courageous pilots and crew of the 240th Assault Helicopter Company, Benavidez jumped from the hovering aircraft and ran nearly 100 yards through withering enemy fire.  Despite being severely wounded, Benavidez reached the perimeter of the team and proceeded to organize an extraordinary defense and rescue.  During the hours-long battle, he was bayoneted, shot, and hit by grenade shrapnel more than thirty times, yet he refused to abandon his efforts until every survivor was out of harm’s way.

Written with extensive access to family members, surviving members of the 240th Assault Helicopter Company, eyewitness accounts never before published, as well as recently discovered archival and declassified military records, Blehm has created a riveting narrative of Roy Benavidez’s life and career, and of the inspiring events that defined the brotherhood of the air and ground warriors in Vietnam.  Despite being one of the many unsung heroes of the war, Benavidez was repeatedly denied the Congressional Medal of Honor.  His actions were revisited thirteen years later when a Green Beret eyewitness, whom Benavidez had rescued, came forth and wrote a statement that revealed, in graphic and vivid detail, what happened on that fateful day in 1968.

Again, Eric Blehm does a fantastic job telling a story that needs to be told.  There are so many soldiers from the Vietnam War whose bravery was never recognized, and in Legend, Blehm does one veteran absolute justice.  He chronicles Benavidez’s early life, spotlighting the experiences that shaped the man he would become, and details his vast experience and training in the US Army prior to May 2, 1968.  He causes the reader to feel a great respect for Benavidez and anyone else who serves in the military by showing the astonishing levels of character and discipline required.

I chose this book to review because I reviewed Fearless by the same author a couple years ago and absolutely loved it.  Blehm tells the stories of heroic soldiers in a way that honors them and is also interesting and easy to read.  My only problem with Fearless was that the military jargon was hard to understand; however, in Legend, he fixes that problem by quickly explaining acronyms and terms whenever they come up.

Legend was thrilling to read.  I read it in about two days because I couldn’t put it down.  I would recommend this to anyone who enjoys an exciting read, and I will forever pick up anything by Eric Blehm becuase he is a fantastic storyteller.