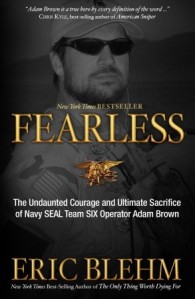 When Navy SEAL Adam Brown woke up on March 17, 2010, he didn’t know he would die that night in the Hindu Kush mountains of Afghanistan — but he was ready.  In a letter to his children, not meant to be seen unless the worst happened, he wrote, “I’m not afraid of anything that might happen to me on this Earth because I know no matter what, nothing can take my spirit from me.”

Fearless is the story of a man of extremes, whose courage and determination were fueled by faith, family, and the love of a woman.  It’s about a man who waged a war against his own worst impulses, including drug addiction, and persevered to reach the top tier of the U.S. military.  In a deeply personal and absorbing chronicle, Fearless reveals a glimpse inside the SEAL Team SIX brotherhood and presents an indelible portrait of a highly trained warrior whose final act of bravery led to the ultimate sacrifice.

Adam Brown was a devoted man who was an unlikely hero but a true warrior, described by all who knew him as…fearless.

Usually when I write a book review, I ask myself what I liked and didn’t like about the book.  I try to make notes about the writing style and the editing.  I categorize the book by giving it stars.

In that sense, I am not reviewing this book.  Even though yes, technically I gave it stars, I really felt this book was too good to categorize.

I started out analyzing the book like I do normally, but I got so pulled in to Adam’s story.  Adam Brown was an amazing person.  He rebounded from a troubled youth to become a strong Christian, a faithful husband, a devoted father, and one of the best men in the entire US military.  He is the kind of man people look up to.  He is the kind of man we all strive to be.

Doing his story justice was a daunting task.  Blehm had to tell his story respectfully, showing Adam’s humanity and his mistakes, while also portraying him as the hero his family and friends knew him to be.  He had to tell the story in a way that Adam might have told it.

He definitely came through.  Blehm narrates Adam’s story from birth to death, giving very specific details about every part of his life.  Every scene in the book gives Adam a new level of depth; Blehm makes the reader feel almost as if he knew Adam.  But the text isn’t overwhelming the way it might be if someone else had chronicled it — Blehm gives the reader exactly enough information to be able to grasp who Adam was at any given stage of life, and then he moves on.

It wasn’t a book I had to force myself to keep reading.  As I said above, I got pulled into Adam’s story.  From the beginning, both Adam and Blehm had me emotionally hooked.

There is only one bad thing I can say about this book, and that is the military jargon.  The US military is a complicated, multi-faceted organization, especially at the upper levels where Adam was.  Blehm did a thorough job explaining the military structure and all the acronyms, but I still found myself skimming a bit over those explanations as they were a little confusing.

All in all, this was a book that I would actually bring up in conversation to say, “Hey, you should read this.”  Adam’s story is an inspiration that Blehm portrayed beautifully.

Find Eric Blehm on the Web!