I love Toms, and I’ve always admired the things people do with Toms stuff.  I especially like the idea of a Toms wallet, which is made with the flag that comes with your shoes.  So I was pretty excited when I found my Toms flag while cleaning under my bed.

However, I didn’t like any of the tutorials I found online.  Most had few pockets; plus I wanted a flap.  I found a few people who made theirs differently, but in those cases the tutorials weren’t very clear.  So I made my own.  :)

I actually ended up using my Toms bag, which the shoes come in — no boxes for Toms!  The double-sided-ness of the bag meant my wallet ended up being almost fully lined.  Ready?

2.  Take your big piece and hide the raw edges by pinning the open sides inward about 1/2 inch.  Iron this to make a crease, then take those pins out and pin the folded sides together.  Sew up the sides — this will make your lining.

I did it this way to cut down on sewing.  I could have sewn the raw edges down and then sewn the two sides together, but it was much easier and quicker to do it all at once.  Irons are your friend.

3.  Your wallet should be a flat rectangle shape that looks like the Toms logo.  Turn the fabric over so that the “One for One” logo faces up.  Fold the bottom edge up until you see the bottom of the blue stripe.  This is where your money will go.  I decided to make a little change pocket by measuring the width of a dollar and sewing by the left edge of the dollar.

If you want, this is the time to make a button hole on the change pocket and add a button to keep the change from slipping out.  You could also use a snap or Velcro, although if you use a snap you might want to attach it before you sew.  I had no Velcro or snaps, and unfortunately I don’t have a button foot either.  I may just use the pocket for chapstick or something, because it really is pretty small.

4.  Now you’ll make the credit card pockets.  Remember those strips you cut off at the beginning?  Take the one that had the drawstring in it, lay it so the drawstring side is facing away from you, and fold up approximately 3/8 inch from the bottom.  Iron a crease.  Unfortunately I forgot to take a picture of this.

Next fold this strip in half so you know where the middle is.  Crease it if you want; it makes it easier to see.  Sew up this line to make two separate credit card pockets (this is another thing I didn’t like about the tutorials I found — no separation — gaah!).  Make sure to test both pockets with a card, and put the cards close the middle so you’ll have room to sew on the sides later.

5.  Pin your credit card pocket to the bottom of your wallet and sew.

6.  Sew up the sides of the pockets.  Be really careful when you do this; the fabric is thick.  I broke a needle, but after that I used a jeans needle, which worked well.  You don’t have to sew completely to the top or bottom because money and credit cards are big and won’t fall out a tiny hole.  I did have to sew right angles to get around the rivet on one side.  Not a big deal.  You could always just skip that part and have a tiny hole if you can’t sew around it.  Fold the flap down.

Tada!  There are a bunch of things you could do with this wallet, like add Velcro to the flap.  One idea I had (too late to do to mine) would be to make a credit card “window.”  For this, just cut out a square from one side of your credit card pocket and sew a slightly bigger square of plastic onto the backside.  The CapriSun Roarin’ Waters juices have a clear back; just empty a juice pouch, cut into the bottom to wash it, and cut a square out of the clear back.

Because I didn’t measure much, the edges didn’t match up perfectly.  However, I like it because it gives the wallet kind of a rugged look.  That’s the final thing that differentiates mine from the ones on the Web — others had that rugged look because of raw edges.  I like the “rugged” idea, but I hate raw edges.  Therefore, compromise.

I think Toms would be proud. 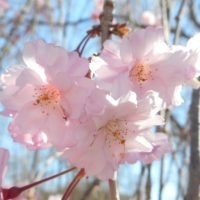 Bipartisan dialogue for the politically engaged

Writer Side of Life

Words that Play with Time

All the crap I shouldn't write